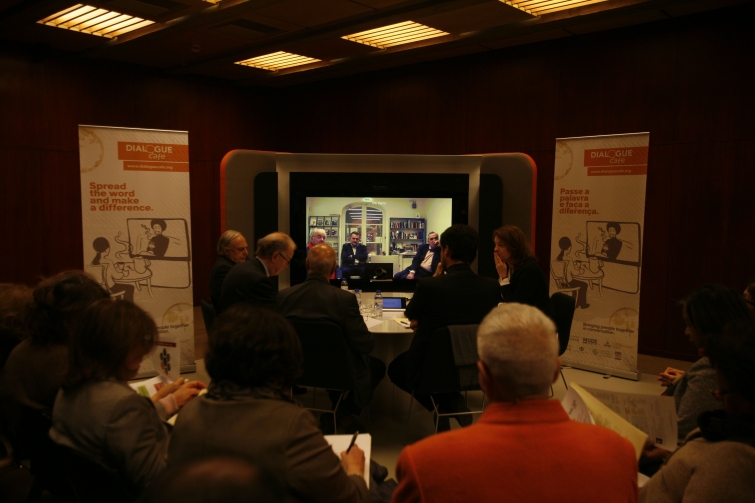 In partnership with Dialogue Cafe Network, the Global Platform for Syrian Students organised an WIHW join event on the 8th of February 2014 in order to support Syrian students.

The World Interfaith Harmony Week (WIHW) has been promoted by some of the world’s most influential people and its goal has been to be a completely decentralized initiative.

In partnership with Dialogue Cafe Network, the Global Platform organised an WIHW join event on the 8th of February 2014, with a session hosted by Dialogue Cafe Lisbon, where a large and ecumenic group of participants (including the leaders of the main religions) matched with peers from Lebanon and France. Lisbon was connected to Beirut and Paris, where different representatives of different faiths debated different points of view.

Since in Portugal a group leaded by former President Jorge Sampaio have been working in developing the Global Platform For Syrian Students, all the participants in the session where challenged to commit themselves to this cause. Portugal already received about 40 Syrian students for the Spring Term, and the idea is to raise awareness and funds to bring more students.

This global conversation was chaired by President Sampaio and in the end of the session a large majority of the participants really committed themselves with this goal.

For further information, contact us at: This email address is being protected from spambots. You need JavaScript enabled to view it.

More in this category: « Youth voices are heard at the European Parliament Getting together! »