The Global Platform at a glance

The Global Platform for Syrian Students is a non-profit multi-stakeholders organisation, founded in November 2013, by Jorge Sampaio, former President of Portugal, with the support of a core group of institutional partners, namely the Council of Europe, the League of Arab States, the International Organization of Migrations (IOM) and the Institute of International Education (IIE).

This initiative is unique in that it effectively brings together the efforts and the contributions of the various stakeholders willing to back an emergency mechanism to support Syrian students: governments, international and regional organisations, donor agencies, universities, foundations, NGOs of different cultural backgrounds and faith-based organizations, the private sector and individuals. Through a Network of Partners, an Academic Consortium, and a Special Emergency Fund, the Global Platform for Syrian Students works in a collaborative way.

This programme entered into its operational phase in March 2014, when Syrian college students received a rare lifeline. A humanitarian rescue operation – organized by the Global Platform with the support of the Portuguese Government – allowed 45 Syrian students selected out of 1,700 candidates to resume their university studies under an emergency scholarship program, providing a comprehensive integrated “higher education care” services package.

Since its launch in 2013,  the GP4SYS has already awarded more than 550 annual scholarships, participated or organized in more than 65 international events and it has launched a Rapid Response Mechanism for Higher Education in Emergencies (RRM) that is now being finalized to be fully operational by 2021. 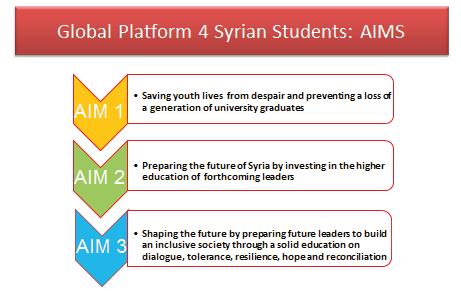 All people have a right to education, and those affected by emergencies, be it because of man-made conflicts or natural disasters, are no exception. Further to this rights-based approach, there is a growing body of evidence on education’s life-saving and life-sustaining role in particular by contributing to the self-reliance of young people and communities. Home to the vital 18-32 age group, higher education in particular plays a unique role in emergency situations as a powerful drive for change and catalyst for recovery. Higher Education gives hope for the future. Yet only 3% of refugees have access to higher education according to the UNHCR.

The Global Platform for Syrian Students is underpinned by this two-fold approach. On the one hand, it is shaped by the strong conviction that education as a right offers protection and mitigates the psychosocial impact of conflict and disasters by providing a sense of normalcy, stability, structure and hope for the future. On the other hand, it recognizes that higher education plays a unique role in the context of emergencies as it produces the leaders and skilled workforce that war-torns countries need to move forward, in particular after crisis.

As the conflict in Syria has triggered the world’s largest humanitarian crisis since World War II, the GP4SYS aims to contribute to respond to this catastrophe that impacts all neighbouring countries, by focusing on Higher Education needs, an area of humanitarian intervention that has been seriously neglected by the international community.

The main mission of the GP4SYS is to provide access to higher education for Syrian students affected by the war, in safe countries througout the world. The Global Platform is an international endeavour to provide emergency scholarships to Syrian students and enable them to acquire professional qualifications. It offers a comprehensive, integrated higher education services package to Syrian students who are selected and awarded a scholarship.Furthermore, it also aims at forging collective political will and to mobilise concerted action aimed at boosting higher education opportunities in emergencies at large and to place this issue high on the international agenda.

The Global Platform for Syrian Students joins other on-going efforts to create higher education opportunities for Syrians affected by the war, thus avoiding the loss of a generation of university graduates. It builds upon successful experiences developed by other organizations, such as the Albert Einstein German Academic Refugee Initiative Fund (DAFI), implemented by the United Nations Refugee Agency (UNHCR) and the programs to help students and scholars under threat worldwide, established by the Institute of International Education (IIE), a world leader in the international exchange of people and ideas.

Ultimately, the GP4SYS aims at setting up a Rapid Response Mechanism for Higher Education in Emergencies as a way to address higher education needs through a systemic and sustainable solution.

From an organizational point of view, the Global Platform for Syrian Students is innovative in two main ways. On the one hand, it benefits from its wide network of partners developing a very active and permanent cooperation through networking solutions. On the other hand, it has a central “bureau” embedded in the institutional office of former President Jorge Sampaio that is fully staffed and equipped at zero cost for the Global Platform.

As a multi-stakeholders initiative, the Global Platform has an international Advisory Board comprising representatives of the League of Arab States and of the Council of Europe and a number of eminent personalities such as Kerstin Eliasson, former Secretary of State for Education, Sweden; HRH Princess Rym Ali, President of the Jordan Media Institute and Richard Branson, from Virgin Group.

The “Emergency Scholarship program” is managed by a coordinator/director and is supported by a small dedicated secretariat team.