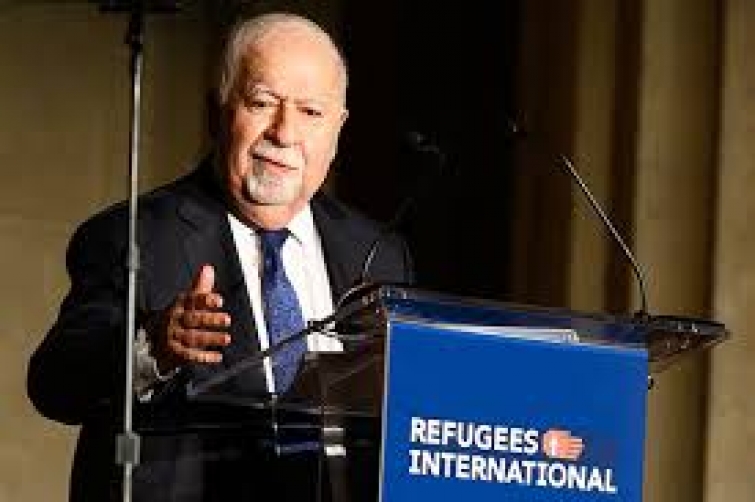 “At a time when bitterness and disaffection are on the rise, we have to come together to speak up against intolerance, xenophobia, and racism,” began Jorge Sampaio, former president of Portugal and a distinguished former trustee of Carnegie Corporation of New York. He was addressing some 500 guests who gathered on April 30 in Washington, D.C., to celebrate the 40th anniversary of the Refugees International organization.

President Sampaio and Vartan Gregorian, president of Carnegie Corporation of New York, were awarded the organization’s highest honor, the McCall-Pierpaoli Humanitarian Award, for their steadfast leadership in the international community and for their work to ensure funding for displaced Syrian students and scholars through the Global Platform for Syrian Students and through Carnegie Corporation of New York’s support.

“This year’s awardees have demonstrated incredible willingness to take on the most difficult challenges and push the international community to do better in pursuit of justice and human rights,” said Eric Schwartz, president of Refugees International.

As the founder and chairman of the Global Platform for Syrian Students, President Sampaio has managed the impossible task of gathering an emergency consortium of governments, regional and international organizations, donor agencies, foundations, universities, faith-based organizations, and various ethnic and cultural NGOs, along with the private sector and individuals. President Sampaio’s agenda has been and continues to be the rescue of as many students as possible, providing them with a home and the opportunity to be educated, so that they might serve as future resources for their societies.

“To stand up with the most vulnerable, with men, women, and young people around the world, and join efforts to live up to their aspirations for a life of dignity and respect, this is what Refugees International has been doing for the last 40 years,” said President Sampaio via a video recording addressed to guests at the gala. He concluded with an appeal: “Let’s all together step up our shared responsibility for fostering peaceful, just, and inclusive societies which are free from fear and violence.”

The audience responded enthusiastically. President Sampaio’s remarks were followed by a message from Eileen Shields-West, Refugees International board chair, explaining how she came to know and be impressed by the Global Platform: “President Sampaio offered how he envisioned a time when these students, armed and emboldened with their degrees, would return one day to Syria to become contributing members of their society. He practically moved us to tears with his passion for this cause and the value of scholarship in tearing down borders and building communities of people who value learning and scholarship.”

President Sampaio launched the Global Platform with just 100 euros — and within six months the first group of 45 Syrian students arrived in Portugal to resume their studies, which had been disrupted by war, under an emergency scholarship program. Since 2015 Carnegie Corporation of New York has given three grants totaling $1 million dollars to the initiative. In accepting the McCall-Pierpaoli Award on behalf of President Sampaio and himself, Gregorian praised his fellow honoree for maintaining the ideals of European humanism and enlightenment, saying:

For me, President Sampaio embodies the conscience of Europe. We Americans should be grateful that there are still people in Europe who believe in enduring values that transcend cultures and civilizations, values that unite all of us. Such men and women believe that humanity is one; and that every fragment of humanity is God’s creation, deserving of respect and care.

Gregorian made a point of emphasizing that President Sampaio is the real hero. He is the brainchild behind the Global Platform for which the two of them were being honored. “Giving money is easy, investing money is hard, and it was the vision of President Sampaio that led this humanitarian campaign.”

The McCall-Pierpaoli Humanitarian Award was also given to The Honourable Louise Arbour, former special representative of the United Nations secretary-general for international migration, for her lifetime of work in the pursuit of justice and human rights. At the UN, Arbour led advocacy efforts on international migration, provided policy advice, and coordinated United Nations entities on migration issues. Her work on the Global Compact for Migration helped to establish an important global framework to manage the migration crisis.

Refugees International does not accept any government or United Nations funding, ensuring the independence and credibility of the nonprofit’s work and allowing its advocacy to be both independent and fearless. The annual gala seeks to honor those who have made a commitment to meeting the needs of the displaced and, in particular, those who work to find solutions to the migration and refugee crises.

Others recognized included Taller Salud, a humanitarian aid group in Puerto Rico, which provided critical services and unwavering support in the wake of Hurricanes Irma and María; U.S. Representative Will Hurd of Texas, for his commitment to the resolution of challenging migration issues through civil discourse based on facts and not fear; and Mayor Wilmot Collins of Helena, Montana, for effectively championing the importance of the U.S. refugee resettlement program while reminding the public about the enormous positive contributions of refugees to our society.

Since 1979 Refugees International has advocated for lifesaving assistance and protection for displaced people who have been deeply affected by conflict, social upheavals, and natural disasters. For many years it has been the leading U.S. advocacy organization committed to voicing the struggles faced by the most vulnerable populations. In the past year, Refugees International’s work occurred in part on field missions to Bangladesh Colombia, South Sudan, Ethiopia, Turkey, Central African Republic, and other focus countries.

Watch their speeches below.

More in this category: « Breaking News: Charity Art Auction Catalogue is Now Available! World Refugee Day: Join us to set up a Rapid Response Mechanism for Higher Education in Emergencies! »